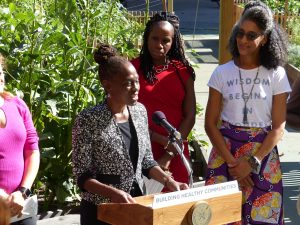 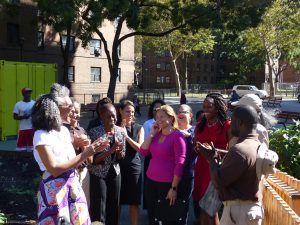 The Urban Farm Corps welcomed these special guests to the Wagner Houses farm with cheer and of course, veggies from the farm to celebrate their season’s service. The event marks a milestone in the Farms at NYCHA initiative, officially launched in September 2016 under the city-wide Building Healthy Communities, as First Lady McCray announced the project’s expansion into two new boroughs! GCF AmeriCorps Member have begun construction at Forest Houses on the next Farm at NYCHA in the Bronx. Farms at NYCHA will make its way to Staten Island next spring, expanding the program four of five boroughs.
Press release from City Hall

Special thanks to Laurie Tisch and Rick Luftglass of the Laurie M. Tisch Illumination Fund, Roderick Jenkins of the New York Community Trust, Sara Gardner, Executive Director of the Fund for Public Health in New York, Matthew McCarthy, VP of Foods at Unilever and Tamara Greenfield, Director of Building Healthy Communities for joining us on Thursday and their generous support for the Farms at NYCHA. 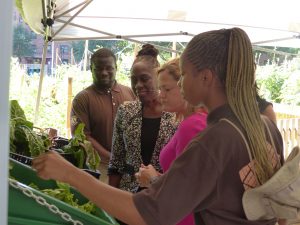 Read more coverage of the event and the Farms at NYCHA expansion from the New York Daily News and the Staten Island Advance.
Watch the event live streamed from the First Lady’s page: